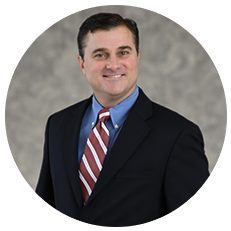 Due to the wide range of legal issues he has handled, as well as the diverse business conducted by his clients, Gene is equipped to provide a broad range of practical and legal counsel to his clients and to negotiate all types of commercial transactions.

A Florida native, Gene has lived, studied and worked throughout the State all of his life.  He was born in Melbourne, spent his childhood in Tallahassee, returned to Central Florida as a youth and graduated from St. Cloud High School in 1987.

After earning a degree in finance from the University of Florida, Gene worked for a finance company and Walt Disney World for several years before attending Florida State University College of Law, where he graduated with honors in 1997.  During his final year of law school, Gene had the honor of serving as a judicial extern for Florida Supreme Court Justice Harry Lee Anstead.  He has worked his entire legal career in Orlando.

Since the beginning of his practice, Gene has been actively involved with the Orange County Bar Association, a voluntary professional association comprised of over 3,000 attorneys, judges and legal professionals in Central Florida organized for the purpose of promoting professionalism and facilitating lawyer contribution of free (“pro bono”) legal services to those in greatest need, but whom cannot afford legal services.

Initially serving on the Board of Directors for the Young Lawyers Section of the OCBA, he quickly was elected to serve on OCBA's Executive Council, as an office in every capacity, and most recently completed his term as its 2007-2008 President.

Gene also actively participates in the Florida Bar's Standing Committee on Pro Bono Legal Service and the First Central Florida American Inn of Court.  He personally provides pro bono services for children removed from their parents due to no fault of their own though the OCBA Legal Aid Society's Guardian Ad Litem program.  He and his wife, Lori, have two children.